Pastor Joseph Fallah and staff having been commissioned by God on February, 26 2002 with the mandate to preach and prepare leaders for the Kingdom of God; we commence with approximately Fourteen (14) committed members and subsequently three (3) pastors.

The vision establishing the New Life Pentecostal Outreach Ministries/Church envision the establishment of a School, and subsequently a pastoral residence to host and capacitate ministers for the holistic advancement and decentralization of the gospel of Christ within the fifteen (15) political sub-division of our country-Liberia.

As we have been led by the Holy Spirit, this commission had been in existence for the last eleven years with numerous challenges and obstacles faced as the result of the lack of adequate financial support to the Ministry. As a means of achieving our objective, “the “NLPOMI” had embarked on several collective Christian ventures that had in one means or the other supplemented our efforts thus far in mitigation socio-economic impoverishment as a Ministry.

However, with the limited resources and the current economic atmosphere that shadows ministry within post-war Liberia, we had managed to have established self-assistance and or entrepreneur programs that will intern serve as a source of generating proceeds to fostering the work of our Lord and Savior Jesus Christ. In recent times, we have conducted workshops for non-Christian women and girls on the vulnerability of prostitution, and the negative impactful stigma it poses on an individual; through that, we manage to have won not less than, 250 souls within the Peace Island community and its surrounding area. Film shows and other form of Christian games have been part of our three years strategic evangelism plan of which souls have been won for the kingdom.

This project attempts to address major challenges being confronted by the Ministry as a factor of enhancing the holistic growth and development of the Ministry in general. This project will aid in empowering and accommodating souls won as a result of evangelism and mission initiatives around the country. And will also re-enforce the spirit of Christian volunteerism as been proven that people especially from those that I have personally work with express their interest for the gospel but the challenge of accommodation and capacity building had been some of our obstacles.

The provision of educational opportunities will be one of the primary focuses of this project not just to the ordinary masses but also new converts, members and especially pastors. As the need for capacitating had been paramount among many concerns raised by those affected within the shadows of illiteracy, it will be prudent enough to adequately established and enforce this project for the advancement of the Kingdom of our lord and savior Jesus Christ. 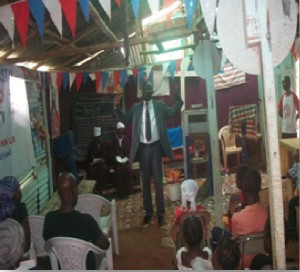 Pastor Joseph Fallah teaching the students from the Word of God