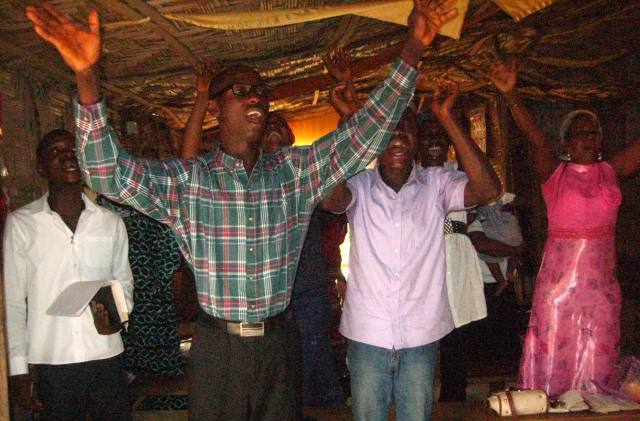 2013 has been a tremendous year for the Kingdom of God. We have received numerous reports of hundreds of people receiving Christ as their personal Savoir; being delivered, healed, and miraculously receiving God’s provision in time of need. The Lord has also blessed Freedom’s Hope Ministry with precious donors that have giving out of their hearts in order to bless many in the various countries God has directed us to help. Below is just a small example of what God has done through this ministry this past year:

Having been commissioned by God in February the 26, 2002 with the mandate to preach and prepare leaders for the Kingdom of God; New Life Pentecostal Outreach Ministries/Church (NLPOMI) began with approximately Fourteen committed members and subsequently three pastors.

The vision establishing NLPOMI envision the establishment of a School building, and subsequently a pastoral residence to host and accommodate ministers for the advancement of the gospel of Christ within the fifteen political sub-division of our country-Liberia.

As they have been led by the Holy Spirit, this commission had been in existence for the last thirteen years with numerous challenges and obstacles faced as the result of the lack of adequate financial support to the Ministry. As a means of achieving their objective, NLPOMI had embarked on several collective Christian ventures that had in one means or the other supplemented their efforts thus far in mitigation socio-economic impoverishment as a Ministry.

However, with the limited resources and the current economic atmosphere that shadows the ministry within post-war Liberia, they had managed to established self-assistance and or entrepreneur programs that will intern serve as a source of generating proceeds to fostering the work of our Lord and Savior Jesus Christ. In recent times, the ministry has conducted workshops for non-Christian women and girls on the vulnerability of prostitution, and the negative impact it poses on an individual; through that, they manage to have won not less than, 250 souls within the Peace Island community and its surrounding area. Films and other form of Christian outreach programs have been part of their three year strategic evangelism plan of which souls have been won for the kingdom.

This project justifies the need and eagerness of the gospel within the fifteen counties of Liberia with a central focus as a pilot project in Monrovia which host about 53% of our country’s 3.5 million populations. It is imperative to mention that the passion for evangelism and mission had and will be the creed of this vision but with the establishment and construction on the school, church and pastoral residence it will thus benefit not only us as a ministry but the nation as a whole and partner institution.

The School which benefits the under-privileged, orphans and widows has, and will continue to strategically focus on educating young girls, the older folks and catering to children of whom their parents had died due to the war or other forms of illnesses ( Hiv/Aids, T.B, Ebola etc. ). This ministry is in no way seeking self-gratification but molding the minds for Christ and alleviating illiteracy and economic burden of the less fortunate within the society and will be a medium through which we as a church can train and retain members within the domain of the church. 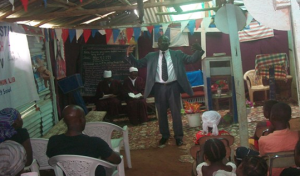 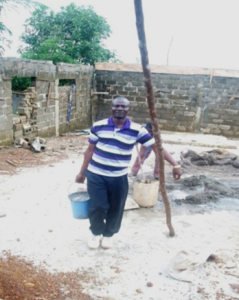 Everybody has heard of Typhoon Haiyan and the devastation wrought on the Centeral Philippines, due in large part by the mainstream media; but how many have heard of the cataclysmic destruction brought by the terrible 7.2 magnitude earthquake that struck the same geographic area just three weeks prior to the most powerful storm system ever recorded to make landfall. Most people don’t realize the destructive nature of the quake was at the very least equal to that of Typhoon Haiyan.

Please continue to pray for the people of the Philippines that are suffering from this dual disaster; and please prayerfully consider a most gracious contribution towards the recovery efforts currently underway for both disasters. Remember, 100% of all gifts goes to the very need and are tax deductible.

Following is the first hand account of Saturnino Barace Jr. cousin of Grithcel Barace Miller of Moyie Springs Idaho. Saturnino was the sole survivor of the lateral spreading(large gap where the earth opened up beneath their home) that occoured on Oct. 15, 2013 in barangay Obujan, Antequera , Bohol Philippines .. which is translated below. Here is the English translation of Saturninos story.. 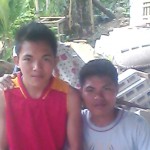 On October 15, 2013 at 8:35 am , my mother Emaliana was washing clothes and father Saturnino and Michael and Saturnino Jr. were doing some construction outside, and Shane Jyle was playing with a paper airplane outside the house. We never expected that the earthquake 7.2 magnitude would come so they rushed to the baby(Shane Jyle) but we never expected that the ground would open up (15 meters wide, 350 meters long and 15 meters depth). All five of us got buried under the ground, my father Saturnino Sr. 51 years old, was embracing Shane Jyle 5 years old, Elizabeth-daughter 24 years old was also hugging Shane Jyle and my mother Michael Barace (left) Saturnino Barace (right) Emaliana 48 years old was embracing Elizabeth (who was speech impared) and me,Saturnino Jr. 18 years old, was miraculously buried with my head above the ground and buried for over 6 hours because the trench was so deep that even the rescuers were afraid to help. I was finally rescued at 3 pm that day by my younger brother Michael (16 yrs. old) because he had felt much pain for my cries for help. Michael survived because he ran away from that place as the ground opened up. We got all of the four remaining bodies out the next day Oct. 16, 10 AM because it was so dangerous during the earliest after shocks. 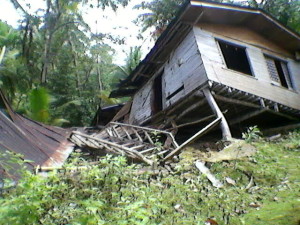 Collapse of a neighbor’s house. 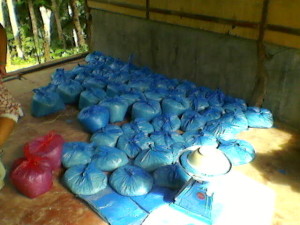 Rice weighed, rebagged and prepared for distribution to families at barangay Obujan. 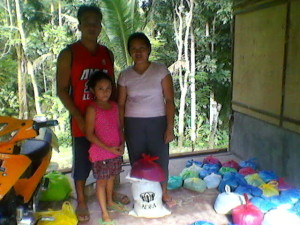 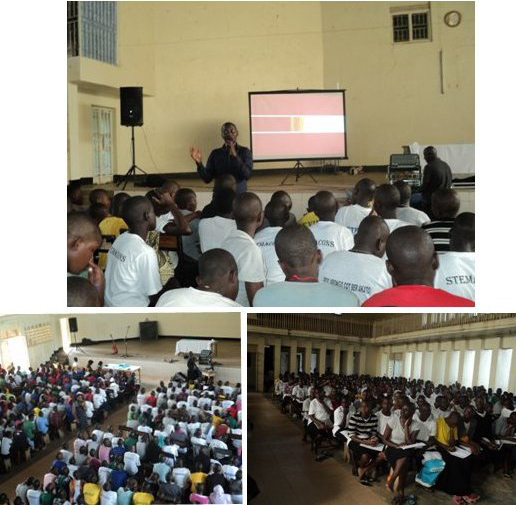 “Africa Life youth Foundation (ALYF) is a Christian   organization which was established in 2004, for the purpose of developing, sponsoring and carrying out Evangelism programs that will improve the quality of life for the children and youth of Uganda and East Africa”.

“Our Mission Statement: is dedicated to fighting poverty throughout Uganda and East-Africa, empowering young people with the Gospel of Jesus Christ, giving them dignity, freedom, peace and hope through Biblical principles”.

“We educate the youth of Uganda in colleges, universities, and communities about the health issues associated with abortion, premarital sex, immature relationships their consequences and share the Gospel of our LORD Jesus Christ”.

“A study conducted recently shows that 30% of all deaths in East Africa are due to abortion related complications. Abortion not only threatens the health and lives of Ugandan women but also for unborn innocents. These outreaches we do help us to identify students who are planning to abort and those who had aborted for emotional, spiritual and physical help”.

“There are so many needy children in Uganda due to HIV/AIDS and Civil wars; they struggle to survive but in vain. We get them off the streets to our child care ministry where the child is nourished well, given medical attention, clothed and then put into school. From there, with the guidance of the Holy Spirit the character building process begins”.

“In the same spirit, I would like to encourage anyone reading this to join hands with us with a gift of at least 50$ per month for a child. That will cater for his or her school fees and other necessary essentials”.

“We also hold Youth camps annually were we prepare and train youths from Communities, colleges and universities with youth-life skills, how they can sustain their lives with small income generating projects. ALYF has to trust God for his provision of 75% of the budget to run the camp since most of the youths cannot afford the costs to attend”.

ALYF has developed their own website to share the heart of their ministry. Please visit them at: africalyf.com All donations sent that are marked for ALYF go 100% to that ministry work.